An important research tool once used to test theories about submerging the human body in water to lessen the effects of G forces encountered during space flight is returning to Bucks County after a 15 year absence.

Flashback… On December 7, 1958 Bucks County native and research scientist R. Flanagan Gray climbed inside a full body enclosure that looked like something out of a Jules Verne novel. Resembling a cast aluminum deep sea diving suit, Gray’s “Iron Maiden” was unique in many ways. One was that it was designed to keep water in. Another was that it was designed to be attached to largest and most powerful human centrifuge the world has ever seen.

After donning a special mask and goggles designed for high-g’s Gray submerged himself in the water that filled the tank and inserted a breathing tube in his mouth. He took a deep breath and held it. With a nod of his head, he signaled that he was ready for his research associates to take the world renowned Johnsville Centrifuge to it’s maximum. The ride eventually took Gray to 31.25 Gs sustained for approximately 5 seconds. By the time the run was over, Gray was exhuasted, quite worse for wear and a world record holder. Since then, noone has attempted to match his extraordinary feat.

Located, at the Johnsville Naval Air Development Center (NADC) in Warminster, PA, the centrifuge, known in the day as Aviation Medical Acceleration Laboratory (AMAL) was one of 31 laboratories on the base. When NADC was shuttered in 1996, the Iron Maiden was moved to the Naval Air base at Patuxent River, MD and placed on display at the Patuxent River Naval Air Museum. The important artifact is now on loan to the Johnsville Centrifuge and Science Museum for the next two years. Following the arrival of the Mercury 7 Gondola this past May, the Iron Maiden is the second major artifact of historical importance to be brought home to Bucks County by the museum.

The Iron Maiden will be on public display at the Bucks County Visitors Center at 3207 Street Road, Bensalem from August 31 through September 23.

“We are excited to bring this important piece of history back to Bucks County,” said Michael Maguire, President of the Johnsville Centrifuge and Science Museum. “The centrifuge was one of the many labs at NADC where pioneering technology that touches our everyday life was developed. Once you see the Iron Maiden and imagine being sealed inside of it, you can’t help but be amazed by the dedication of all the scientists and engineers at NADC. We are thrilled that the Patuxent River Naval Air Museum is loaning this artifact to us. ” 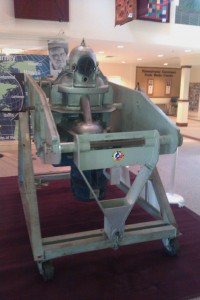