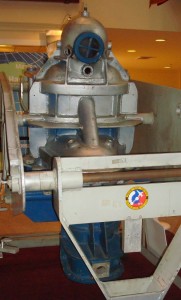 On December 7, 1958 research scientist R. Flanagan Gray climbed inside this full body enclosure. Looking like something out of a Jules Verne novel, and resembling a cast aluminum deep sea diving suit, Gray’s “Iron Maiden” was unique in many ways. One was that it was designed to keep water in. Another was that it was designed to be attached to the largest and most powerful human centrifuge the world has ever seen.

After donning a special mask and goggles designed for high Gs Gray submerged himself in the water that filled the tank and inserted a breathing tube in his mouth. He took a deep breath and held it. With a nod of his head, he signaled that he was ready for his research associates to take the massive machine to its maximum.

Gray experienced 31.25 Gs sustained for approximately 5 seconds – a record that stands to this day.

Eventually all of the Mercury, Gemini, Apollo and early Space Shuttle astronauts; including heroes like Alan Shepard, John Glenn and Neil Armstrong would train at Johnsville, although none would attempt to duplicate Gray’s feat. 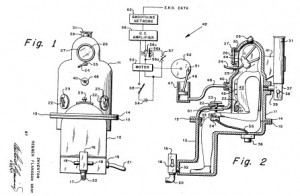 Patent drawings for the Iron Maiden