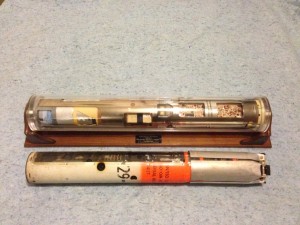 Specialized sonobuoys can also detect electric fields and magnetic anomalies, as well as measure factors in the environment like water temperature versus depth, air temperature, barometric pressure, and wave height. Sonobuoys are often dropped from aircraft that have specialized electronic equipment to receive and process data sent by them.

During the Cold War, sonobouys developed at NADC were used to locate and track nuclear submarines around the world. Sonobouy technology is still in use around the world today. Sonobouys were used as part of the international effort to locate the missing Malaysia Airlines flight 370 aircraft.

Other uses of Sonobouys include: