Last night we held our Fourth Annual Spring Gala at the Vereinigung Erzgebirge (“VE”) Club in Warminster. Thanks to all who came out and helped to make it a special event.  We were honored to have in attendance four Tuskegee Airmen: Mr. Roscoe D. Draper, Maj. John L. Harrison, Maj. Bertram A. Levy, and Dr. Eugene J. Richardson, Jr. As part of the program, we were treated to a special historical interpretation of the life of Bessie Coleman (the first black woman to receive an international pilot license) by Dr. Daisy Century, and we got a great first hand presentation on unmanned aerial reconnaissance and surveillance vehicles by Tom Fenerty, President and CEO of Navmar Applied Sciences Corporation (NASC), one of the nation’s leading defense contractors in this technology. 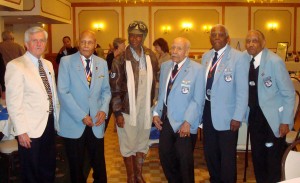 In addition to the opportunity to rub shoulders with history, last night was a great opportunity for us to share our interactive traveling exhibits which have been presented to numerous scout and school groups and to unveil our architect’s rendering of the Mercury 7 Gondola pavilion that we will be proposing to Warminster Township for placement in Warminster Township Community Park on the grounds of the former NADC Johnsville. It has been our honor since the founding of our organization to present the history of innovation of the former NADC Johnsville as a springboard to inspire area youth to pursue STEM careers. 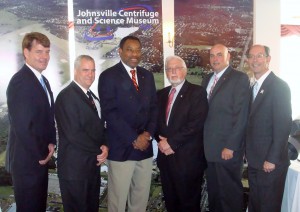 Of course, the success of our gala and everything we do is made possible by the support of our friends and sponsors, including last night’s Mercury Level Sponsors, Navmar Applied Sciences Corporation and the Dombrowski Family and Chicago Title Insurance Company. Our thanks again, to all who attended and made this such a memorable event.