THE MERCURY 7 GONDOLA IS HOME! 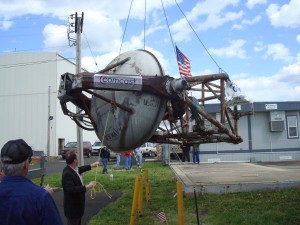 The Mercury 7 Gondola being lowered into place

May 5, 2011 was a historic day for Bucks County as the original gondola of the Johnsville Centrifuge that was used for training America’s early space heroes returned to Warminster. It had spent the last 47 years at the Paul E. Garber Preservation, Restoration and Storage Facility of the Smithsonian Institution’s National Air and Space Museum in Suitland, Maryland.

All of America’s pioneering astronauts, including Alan Shepard, John Glenn and Neil Armstrong trained at the Johnsville Centrifuge prior to their historic space missions. In 1963 the gondola was replaced by a larger gondola to accommodate the three wide configuration needed to train for the Apollo missions. Shortly after its replacement it was transferred to the Smithsonian by the US Navy and has remained at the Garber facility ever since. The gondola has recently been “deaccessioned” (taken off the books) by the Smithsonian with ownership transferring to the Johnsville Centrifuge & Science Museum.

A special “Welcome Home” ceremony was held at the Bucks County Visitors Center for the Gondola on the date that marked the 50th Anniversary of the Mercury mission that placed Alan Shepard as the First American in Space. The move of the Gondola was made possible through a grant from History’s® Save Our History® initiative in partnership with Comcast.

We appreciate the support of all of our friends and partners, including Banacom Signs of Warminster, PA, The Bucks County Conference and Visitors Bureau, Clear Channel Communications, R. T. Hankinson Trucking of Ottsville, PA, Operating Engineers Local 542, Fort Washington, PA, Penn State University, Warminster Township, the many community leaders and politicians that wrote letters to the Smithsonian on our behalf, the staff and Management of the National Air and Space Museum and our many dedicated volunteers. We also appreciate the coverage of the local press, including Action News, Eyewitness News, Patch.com, The Daily Intelligencer, The Bucks County Herald and the many other local newspapers that sent photographers and reporters. We would like to extend a special thanks to History and Comcast for their generous support in the form of a $10,000 Save Our History® grant which enabled us to move the Gondola.

It has been a busy couple of weeks but rewarding in the end. There were many exciting and memorable moments. We loaded the gondola in the rain, but did not feel a drop. Along the way we saw countless cars slow in the passing lane and jockey for position in order to get a picture. We were delayed at the weigh station in Maryland so the state troopers could get a closer look at our historic load and pose next to it. As we drove along I-95 in Philadelphia, the good people at Clear Channel Communications saluted the Gondola’s return with a special message on their digital billboards. Before our arrival at the Bucks County Visitors Center we stopped at the Neil Armstrong Middle School to make sure that all of the banners were in place and our flags were able to fly free. We were greeted by the press and our enthusiastic friends at the Bucks County Visitors Center where the public got their first chance to see the Gondola up close in 47 years!

After that we were escorted by police and fire trucks all the way up Street Road, finally working our way to the Penn State Anechoic Chamber at 300 East Bristol Road in Warminster. There are no words to describe the feeling when the Gondola was finally offloaded and placed on its concrete pad to the cheers of an enthusiastic crowd. It was truly an inspirational moment.

Check out this video of the homecoming of the Mercury 7 Gondola from Patch.com. Make sure to watch in in full screen mode.