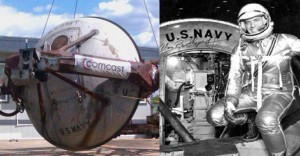 The Johnsville Centrifuge was one of over thirty laboratories at the Naval Air Development Center (NADC) in Warminster, PA. The original centrifuge gondola was in service from 1950 through 1964 when it was replaced by the current spherical shaped gondola. Made of aluminum and lightweight composite materials, it was used to train early Navy jet fighter pilots, NASA’s X-15 pilots, and all of the astronauts for the Mercury and Gemini missions including Neil Armstrong, Alan Shepard, Gus Grissom, John Glenn, Scott Carpenter, Buzz Aldrin and Jim Lovell.

After its removal in 1964, it was sent by the Navy to the Smithsonian Institute where, due to its size, it was placed in an outdoor storage yard, exposed to the elements for decades.  When the organizers of the Johnsville Centrifuge and Science Museum found that the historic artifact had been “deaccessioned” (taken off the books) by the Smithsonian Institute’s National Air and Space Museum (NASM), a campaign was mounted to return it to Bucks County.

As a result of the support of Warminster Township, Penn State University and many community leaders, NASM agreed to the transfer of the gondola. Funding for its move was made possible through generous donations from local residents and a grant from The History Channel in partnership with Comcast.

We are now raising funds to begin the much needed preservation work on the Mercury 7 Gondola and to construct a viewing pavilion where this important piece of our nation’s history can be shared with the public. 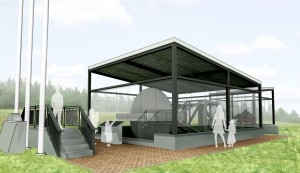 Architects rendering of a proposed pavilion to house the Mercury 7 Gondola.

It’s easy to help. A donation, no matter the size, will help to preserve this unique artifact and ensure that it will inspire generations to come.