We were honored to have Mercury astronaut Scott Carpenter join us at our open house this past April.  He generously shared his memories of the early days of American space exploration and reminisced about the time he and his fellow Mercury astronauts spent training at Johnsville 50 years earlier.  As I understand it, when he got out of his car in front of the building he took a long look at the building and took his cell phone out of his pocket.  After hitting a speed dial number, he said to the person on the other end of the line, “John, you wouldn’t believe where I am.”   Yes, he was speaking to John Glenn, the only other surviving Mercury astronaut.  How cool is that? 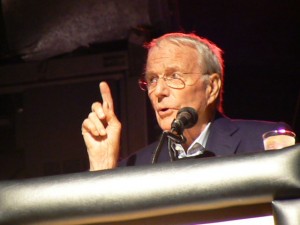