Retired Navy Corpsman Art Guntner made a trip to the Johnsville Centrifuge and Science Museum in Warminster, PA from his home in Inwood, West Virginia not knowing what he would find in the building where he worked as an Aerospace Medicine Technician (AMT) in the early 1960s. What he found was that the largest and most powerful human centrifuge ever built was still standing. Although it hasn’t run for more than a decade and the copper sheeting that once lined the 125 foot diameter chamber has long been removed, seeing the giant machine where he helped to train the Mercury astronauts brought back a flood of memories.

Art Guntner was born and raised in the mining town of Morgantown, West Virginia and is the son of Kathleen and Frank G. Guntner. The Guntner family is steeped in military service, his step-father was in the Army at the end of WWI, his father was a Marine in the Pacific in WWII, and his uncle Charles M. Blaney from Westover, West Virginia, fought on Iwo Jima and was present for the flag raising on Suribachi. A younger uncle, Robert Blaney, retired as an Air Force Master Sargeant.

Guntner joined the Navy in 1958 and graduated from Aerospace Medicine School in 1960. Immediately after graduation he was sent to the Naval Air Development Center (NADC), Johnsville, PA; located just north of Philadelphia. NADC was home to the Aviation Medical Acceleration Laboratory (AMAL) where the largest human centrifuge in the world was located. The centrifuge was built in the late 1940’s to test the limits of human endurance under the high G forces that were produced by the new jet fighters being used by the military. However, by late 1959 and into the early 1960’s the focus of training and research at AMAL turned to preparing the men who would be the first American space explorers.

Given the full schedules of the Mercury astronauts, it was impractical for them to be present for early runs or “flights” on the centrifuge that were made to determine baseline performance. It fell to younger staff members like Guntner to serve as the test subjects for the initial simulations. Over the course of his time at Johnsville, Guntner estimates that he endured over 350 flights in the centrifuge, more than any other test subject. Some flights pushed him to as high as 15 Gs. By way of comparison, a driver in the Indianapolis 500 sustains 4 to 5 G’s in the turns, and astronauts rarely experience more than 6 Gs at liftoff and reentry. 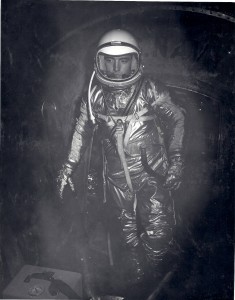 Art Guntner exits the gondola of the Johnsville Centrifuge in 1960 after one of more than 350 simulations.

When the Mercury astronauts arrived for their training, it was Guntner who briefed them on the results of the early simulations, telling them what they could expect from the experiences they were about to undergo. As an AMT, part of his job was to place the bio-medical sensor on the astronauts and monitor functions like heart rate and breathing as they took their rides on “the wheel”.

Guntner was soon working on a first name basis with the Mercury Seven and recounted stories of working with John Glenn and Alan Shepard. He recalled one time when another flight surgeon insisted in placing the bio-med sensors on John Glenn. After half an hour of placing the sensors and another half an hour of getting suited up, when initial diagnostics were run, several of the sensors were not producing any readings. At that point an exasperated Glenn looked at Guntner and waved him into the preparation room saying simply, “Come on, Art, show him how it’s done!” 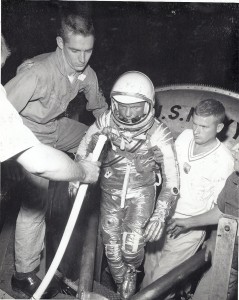 He recalled another time when he was called in on short notice on a weekend to work with the astronauts. His wife had other commitments that day and it was too late for him to find a sitter for his two year old daughter, so he brought her to work with him. It was a long busy day operating with a skeleton staff, so it fell to Alan Sheppard and John Glenn to take turns on babysitting duty. Art says that it is something that his daughter still talks about to this day.

During his visit, Guntner shared his many photos that were taken of him with the astronauts. At the time, Guntner knew that he was involved in a very special program but remained focused on the work he was doing as “just a job that need to be done, and needed to be done to the best of my abilities.” Guntner also recalled some interactions he had with Ham, the chimp whose rocket ride preceded those of any humans.

In addition to his work with the astronauts, Guntner’s work at Johnsville included testing the design of G-suits and the configuration of the space capsules interior control panel under acceleration, and many other classified tests. After his time at the Centrifuge, Guntner qualified as aircrew in the H-34 Seahorse, WC-121 Constellation, the WP-3A Hurricane Hunters, then the H1-N, the H-2 and H-3 helicopters. Guntner was a CICO, (combat information control officer) for four years, flying hurricanes and winter storms over the north Atlantic. Eventually his career took him to NAS Jacksonville, FL and other bases before retirement in 1979. Looking back on a full Navy career, Guntner is proud of the opportunity that he had to serve his country, but it is his time working with the first Americans to fly into space that he will always be the most proud of. 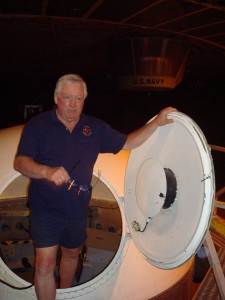 2010: Art Guntner returns to Johnsville to share his stories about his experiences working with the Mercury Astronauts.

Did you or someone you know work at Johnsville?  If you’ve got stories, we’d love to hear them.  Contact us at stories@nadcmuseum.org